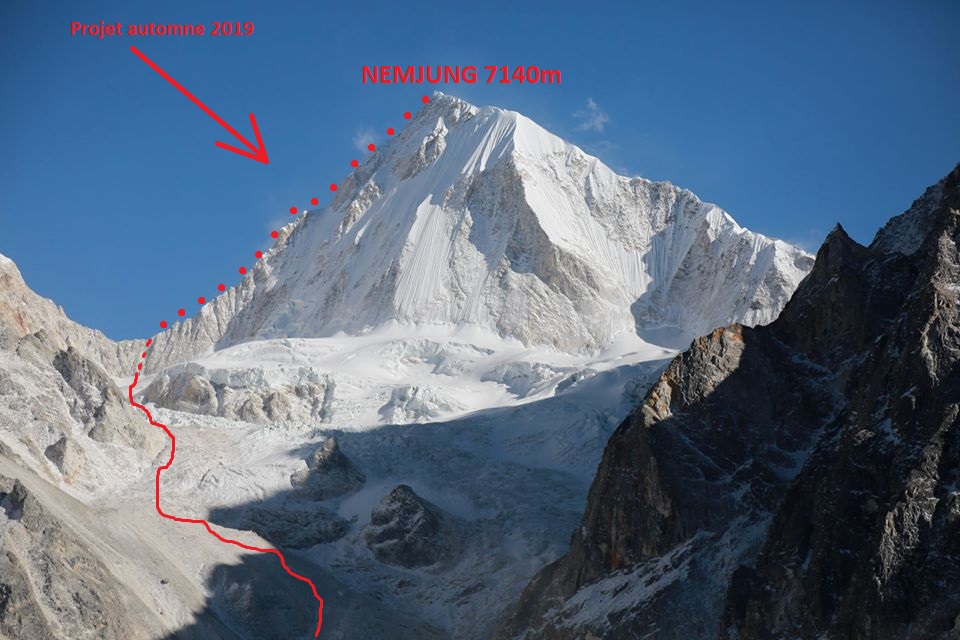 Nemjung Himal is a mountain in the Himalayas of Nepal. It is located approximately 150 kilometres (93 mi) northwest of the Nepalese capital Kathmandu and about 25 km northwest of the eight-thousander, Manaslu. Its summit has an elevation of 7,140 metres (23,425 ft). Nemjung was first climbed via the east ridge on October 27, 1983, by a joint expedition from Nepal and the Hirosaki University Alpine Club led by Junji Kurotaki. Previous attempts had been made in 1963 by a Japanese expedition from the Den Den Kyushu Alpine Club led by Hisachika Zengyou; in 1994 by a British expedition, and in 2009 by a French team. On October 30, 2009, a Japanese team led by climber Osamu Tanabe summitted Nemjung via its previously unclimbed west face and west ridge. It is near Himlung Himal (7,126m). 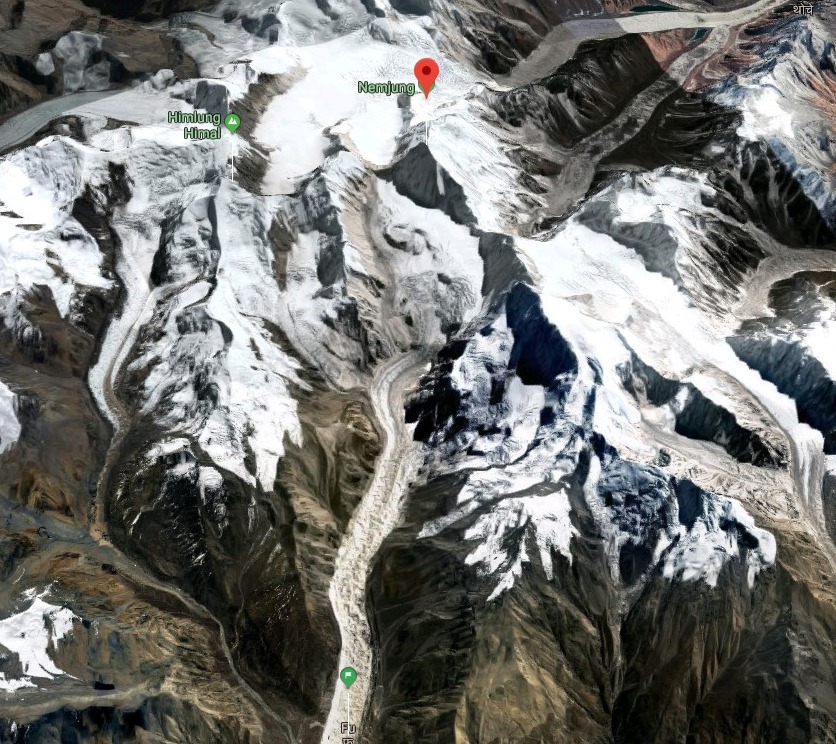 Himalayan veteran Osamu Tanabe led an eight-member Shinshu University Alpine Club expedition to Himlung Himal (7,126m) and Nemjung. On October 14 Shin Egawa, Nobusuka Oki, Tokihiro Takizawa, and Jaya Prakesh Rai reached the summit of Himlung via the standard route up the west ridge. They were followed the next day by Hiroko and Yasuhiro Hanatani, and Michihiro Kadoya. Less than two weeks later Kadoya, Yasuhiro Hanatani, Oki, and Tanabe made a two-day approach from the north to the base of the west-northwest face of Nemjung, bivouacking at ca 6,000m. On October 29 they started up the 1,000m face, climbing 18 60m snow and ice pitches until nightfall when they bivouacked at 6,840m. The following day they reached the upper west ridge, continued to the summit, and returned to their bivouac. On the 31st they rappeled the face and returned to base camp. Forty-eight-year-old Tanabe has climbed Everest, K2, and other 8,000m peaks. In 2006 he climbed the south face of Lhotse in winter but did not continue to the summit. However, Nemjung was the first major Himalayan peak he has climbed alpine-style.

The only previous ascent of Nemjung was made in 1983 by Junji Kurotaki’s Japanese expedition, via the east ridge, approaching from the southwest. Prior to 1992, there was confusion distinguishing Himlung and Nemjung, and most teams attempting what they believed to be Himlung were trying Nemjung. The west ridge may have been tried during that period, but it was definitely attempted in 1994 by Peter Hudd’s British expedition, which gained the ridge from the south, before retreating in bad weather from 6,370m. Subsequently, several other expeditions attempted the ridge from both north and south sides without success, notably French teams in 2004 and ’07, which reached higher than 6,500m. 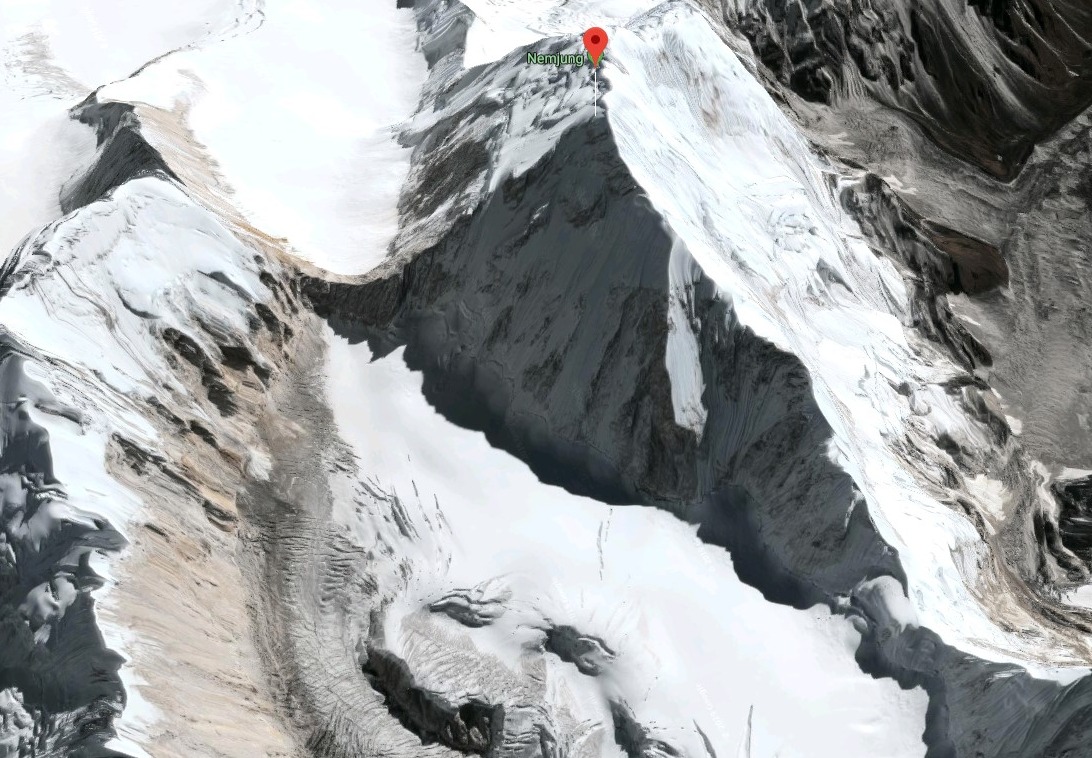 French alpinists Yannick Graziani and Christian Trommsdorff have climbed the south spur of 7,140-meter (23,425-foot) Nemjung in Nepal. The two climbed the route in a six-day round trip, reaching a high point of approximately 6,900 to 7,000 meters atop the south face, but they did not continue across the long easy ridge to the peak’s summit.

Graziani and Trommsdorff had hoped to climb nearby Manaslu but could not acclimatize sufficiently because of too much snow and poor weather. Before starting up Nemjung, they had only three nights above 5,000 meters, followed by a 12-day period of stormy weather. The two waited three full days after the storm ended for conditions to stabilize, and then started up the south face of Nemjung.

The duo bivied four times during the 2,300-meter ascent (ED+) and once during the descent. They climbed 45 pitches of mostly ice, mixed, and snow, with just a few rock pitches, weaving among towers and gullies. Graziani and Trommsdorff reached the top of the south face at 2:15 p.m. on October 15, but another bivy would have been necessary to continue to the summit and back, and Trommsdorff was feeling weak after being hit in the helmet with an ice chunk the day before. “I felt in a kind of shock state, although I didn’t lose consciousness,” he said. “Later, during the long way down, I would have several moments of ‘absence,’ in particular when dropping Yannick’s backpack!”

Nemjung appears to have been climbed by a Japanese team in 1983 for the first—and perhaps only—time. A British expedition attempted the south face and west ridge in 1994.

Graziani and Trommsdorff have formed one of the strongest Himalayan partnerships of recent years. In 2005, along with Patrick Wagnon, they made the first ascents of Chomo Lonzo North and Central (7,540m) in Tibet, with very difficult climbing over 7,000 meters. In 2006, the two completed the first ascent of 7,350-meter Pumari Chhish South in Pakistan. Trommsdorff said their line on Nemjung was “maybe the most beautiful we have ever done, certainly the most continuously steep,  sustained, and constantly exposed, although no pitches were as hard as the hardest ones on Chomo Lonzo or Pumari Chhish.”